Step off the Diet Roller Coaster this Year

I started my first diet as a teenager in the 70’s. Little did I know where this innocent action would lead me. I had unknowingly stepped on the diet/riot roller coaster and it would be many years and tears before I would learn how to step off.

By the time the 80’s hit, I was off to college. In addition to my school books and belongings, I brought along a full-time, secretive cycle of obsessing, restricting and bingeing. In front of others, I ate what were considered to be “good” foods. But behind the scenes, I gorged on everything I never let myself have in public. I was as sick with food as a drug addict is with drugs (which I abused as well).

Looking back now, I know that all of these behaviors were fueled by my intense self-hatred and lack of acceptance. And all of that was fueled by the cultural messages of perfection, my personal painful experiences, and my individual level of sensitivity.

Like millions, I suffered in silence. On the outside, I looked like a student, friend and daughter. On the inside, I lived with a secret life of calorie counting, comparing and compulsivity. Ironically it was some of my sickest behaviors (quick weight loss) that were often complimented and praised by others. Little did I know at the time, our culture has an eating disorder!

I had no clue that underneath my daily food and weight obsession was a well of emotional pain, unmet needs and important issues that needed to be addressed. Thankfully after finally finding help that actually helped, I began discovering what I was truly hungry for and what I really needed. And now I have the honor of teaching others all of the things that I have so generously been taught.

Even though the word is out on the street that diets really don’t work, many people are still seduced by them. Whether they get their diet from some trendy book or magazine, or the advice of a doctor or friend, the bottom line is that restricting leads to rebelling—not to mention obsessing and isolating. Despite what the glossy photos and fad diets promise, if you consistently deprive yourself of delicious, nutritious foods, you are going to end up either malnourished or overeating (or both!)

If you have been riding the diet/riot roller coaster and are ready to step off, I’d love to support you. Over the coming weeks I’ll be posting ideas to help you find a softer, gentler, more loving way to nourish your body in 2017.

Whether you are on an official diet or you just judge certain foods as “good” or “bad,” you are setting yourself up for obsession and/or rebellion. Instead of restricting (in reality or mentality), try making your food choices from a place of self-love and self-care.

Back in the day, when I made my food choices with weight loss in mind, it would lead to one of two things: a restrictive meal that would lead me to binge later on, or a rebellious binge. But, when I began to approach my meals with love, kindness, self-care and honesty, I found that there was nothing to rebel from. And I began to feel truly satisfied from a reasonable portion, rather than unsatisfied after a restrictive meal or stuffed after a rebellious binge.

How might 2017 look different if you focus on feeding yourself from a place of self-love and self-care instead of going on yet another diet?

Andrea Wachter is a Licensed Marriage and Family Therapist and co-author of Mirror, Mirror on the Wall: Breaking the “I Feel Fat” Spell as well as The Don’t Diet, Live-It Workbook. She is also author of the upcoming book, Getting Over Overeating for Teens. Andrea is an inspirational counselor, author and speaker who uses professional expertise, humor and personal recovery to help others. For more information on her books, blogs and other services, please visit www.innersolutions.net. 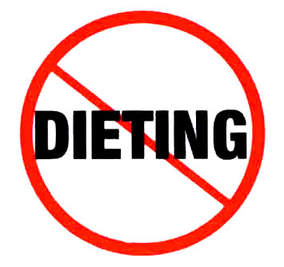